For 2018 my husband and I chose another 12-month project, this time with the intention of getting to know better the local area.

Let me explain first that administration of the Czech Republic is divided into 14 regions as demonstrated in the map below. The coloured area shows the Pilsen Region where we live.

We chose 12 municipalities in the Pilsen Region, each for one month as follows. We were supposed to visit and photograph these towns and their close surroundings belonging under the towns’ administration.

And here is a map where you can see the distribution of the selected places within the region. The numbers correspond with the months so 1 = January = Žinkovy, etc. 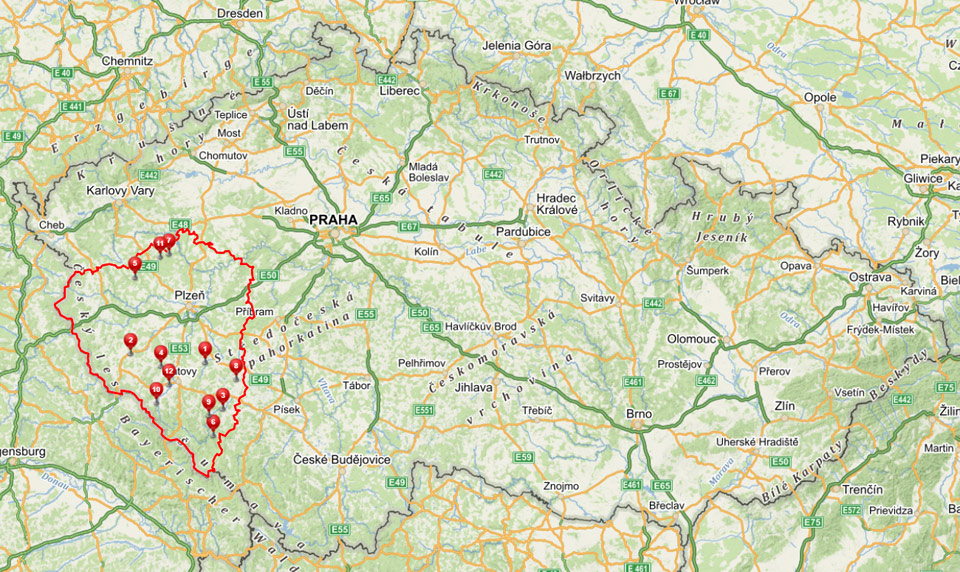 At the end of each month I was supposed to publish a post presenting the assigned place. The number of the presented photos was not determined this time but all the presented photos had to be taken within the assigned month. I was wondering about how many photos is the optimal amount for such a post, that was hard to tell, eventually I opted for 35 photos for the first post and stuck to this amount in all the other posts as well.

When selecting the places, we chose those that we considered appealing and worthy of more than one visit. Some of them we partially knew, others we’d never been to but saw some interesting photos online or read an interesting article about them. In reality our expectations weren’t always fulfilled, some places were more interesting, some less. One town was utter disappointment,  at first sight there was literally nothing interesting to take a photo of. But the truth is that even in that town I eventually managed to take enough good photos for my post, some of them I’d perhaps never considered. That was an enriching experience as well, to keep the eyes and mind open.

Here is an overview of the posts for the individual months and places. If you want to see all the related photos that I took and their stories, click on the images to open the individual posts.