My family spent the last week of July in south-east Moravia, which represents the south-eastern part of the Czech Republic. We were staying in a camp and went on a trip every day so we visited a few castles and several interesting places I’d like to show you.

On the first day we went to visit the Buchlov castle. The funniest part of that trip was that when we entered the first yard of the castle, I immediately realised we’d been there before. My husband didn’t believe me until we returned home when I proved my assertion by showing him photos we took at that time. So first I felt a bit disappointed that we had chosen an already visited site but eventually the visit wasn’t the same at all. Unlike the first visit we joined a castle guided tour and saw a near chapel.

The Buchlov castle was built approximately in the half of the 13th century to guard the eastern border of the Lands of the Bohemian Crown against potential attacks coming from Hungary. The century was determined based on the oldest stone-cut part found in the castle in a Roman arch, there is no written record preserved which would document the origin of the castle.

Though a king was in possession of the castle until the 16th century, the castle was often entrusted to wealthy Moravian clans – king’s creditors. In 1511 the castle was transferred from the king to its new owner as merit award and became private property.

The pine above is very prominent at one of the yards as it grows about three metres above the ground between bricks and stones of the moulding, it was already captured on photos taken there more than 70 years ago.

The castle was originally built in early Gothic style but later it was reconstructed at a high price in Renaissance style. Nevertheless, despite of all alterations and improvements, the medieval building didn’t suit the late 17th and early 18th century lifestyle so a castle in the style of a Baroque Italian villa was built in near Buchlovice and in 1751 the owners of the Buchlov castle moved there for good.

In 1800, a Berchtolds clan became the last clan that owned the Buchlov castle. They owned it until 1945 when the castle was transferred into the ownership of Czechoslovakia. It was thanks to the earls of Berchtolds, especially the brothers Leopold I. and Bedřich, that the castle stayed preserved although it wasn’t inhabited. They gathered valuable and extensive collections, placed them in a family museum established in the castle in the half of 19th century and opened the museum to the public. Nowadays, souvenirs brought from their journeys, which were made all over the world, are displayed in the castle, as well as huge hand-written and illustrated books on herbs and plants.

I wouldn’t have expected to see a mummy in the castle, a mummy coming from Egypt and dated approximately at 331 BC, but there it was. It was brought to the castle together with a coffin and vessels containing internal organs of the deceased in the first half of the 19th century as a wedding gift. The room where it is displayed nowadays is adorned in the style of Egyptian pyramids. It looks surprising and a bit inappropriate – who would want to have a mummy at home, however precious that might be – until you realize that at that time the castle was already used as a museum.

At one of the yards a lime tree grows and there is a legend related to it. At the 13th and 14th century, when Buchlov and its surroundings were administered by royal clerks, so called right of hunting used to be enforced. Poachers – both real and alleged – used to be punished severely, often with the death penalty. If the accused didn’t confess to the crime, they were tortured and then most of them pleaded guilty. The right was transferred to every new owner of the castle until 1749 when it was cancelled by an imperial decree.

The legend says that in 1581 Vlček, a personal armiger of the castle lord, was sentenced to death for his participation in poaching. Even when he was tortured, he insisted on being innocent but eventually he surrendered to the torture and pleaded guilty. When a judgement was pronounced on him, he made his last wish. He asked the jury to let him plant a young lime tree upside down, that is with its roots upside and crown under the earth. If the tree started growing within a year, his innocence would be proved.

The members of the jury were so wonder-struck that they put Vlček in jail for the year and waited. According to the legend, fresh leaves appeared on the tree within the year and Vlček was released. Since then the tree has been called the Lime tree of innocence.

From the castle you can see Saint Barbara’s Chapel which is situated on the neighbouring hill, about 1 kilometre faraway.

Several members of the clans who owned the castle are buried there, under the chapel. I know that many chapels and churches hide graves but this chapel radiates its purpose of being used as a funeral crypt absolutely. Thought there were altars and an organ, the inside looked more like a memorial than a chapel to me. A bit strange, I’ve never seen anything like that.

And finally, a decoration above the entrance to the Saint Barbara’s Chapel: 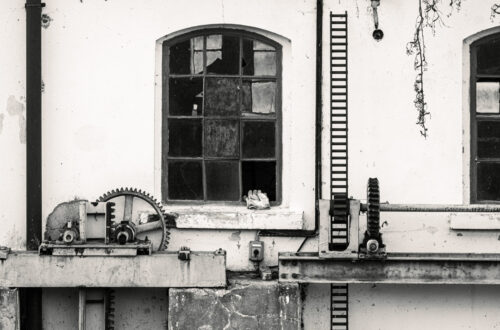