After the Vision-and-Verb intermezzo of the last post, let’s get back to the trip to Lhota I’d told you about before.

When we left the horses, we continued along the path and in some parts we had a wonderful view.

We met a group of friendly people who made me realise that the blue area in the photo below wasn’t water. They explained that it was a solar power station, the largest one near and far.

Then we came to a cross erected in memory of someone and I really regret to say I don’t remember who it was. And I have no idea where to find it so next time, it would be advisable to take a photo of that label describing the circumstances… I enjoyed coming across the yellow flowers below. They look beautiful against the green leaves and blue sky, don’t they, I wish I had them in my garden. They are quite common here.

When I saw the following building, I felt to get many years back in time. Had there not been the cable and the roof windows, the cottage would have looked even more frozen in time.

We came out of the wood and found ourselves on a road leading downhill. We were passing by a very unusual fence, what an interesting idea:

Finally we were almost back in Valašské Meziříčí we started from and I thought about the fact that there are so many various places people live in.

And then we were at my mother-in-law’s again, tired but full of impressions. 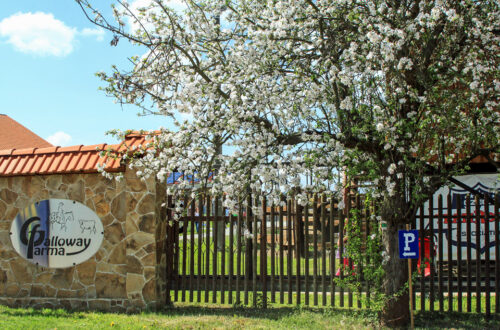