June is drawing to its end so here I am with five final photos that I’ve taken and selected to represent the theme IN MOTION assigned to June in my 12-month photo project.

There are surely many ways how to capture motion in a photo. You need to freeze the action and yet make it obvious and to achieve that, you can choose from several effects. You can opt for having everything sharp. You can have the background sharp and blur the moving object or just the moving part of the object. You can have the object sharp and blur the background. You can blur everything. You can use zooming or panning or any other movement of your camera. You can use flashes for special effects. So much to choose from and your choice depends just on what you want to capture and how you want to express it.

Four of the photos (i.e. all except the last one) were taken with the panning technique which I’ve tried for the first time on this occasion. I’ve read about the technique quite a few times and seen some great images created by means of it so when thinking about capturing movement, it struck me right away. It was fun and I’m looking forward to practising it more often to achieve better results. 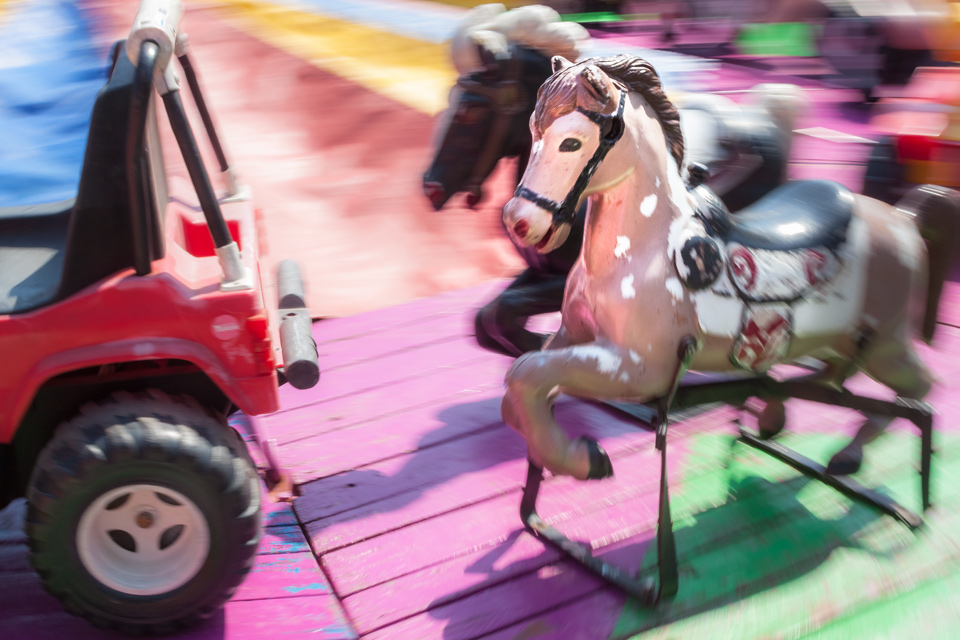 For those of you who don’t know much about panning, here is a basic explanation of how it works. You set slow shutter speed of about 1/30 second (faster for faster objects and vice versa), then you place the moving object in the frame and follow it with your camera. Along the way you  press the shutter release, following the object a while longer. If your effort bears fruit, you get the moving object sharp (the whole or just part of it) and everything else is blurred in certain direction. I’d say that the tram in the first photo and the horse above are quite good examples of the effect.

There is not much to say about the contents of these photos. I’ll just add that I took the photos with the tram, bus and car in Pilsen, the photo with the cyclist at a junior cycling race in Přeštice and the merry-go-round horse at a fair in Přeštice.

That’s it this month, I hope that you can see the movement I tried to capture.

The theme for July is BLACK & WHITE.

All completed themes of the project can be found HERE. Half of the year is over!