As I promised in the previous “Autumn in the crate” post, I’m going to present a different set of in-crate images today, this time with hydrangea. Even more different than I imagined because when I wanted to create a square-formatted image from my hydrangea-in-crate shots, I found out that all those shots were captured in too tight composition to do that successfully so I tried and set a similar scene for another shooting a week later. Well, as it happens, the newer photos do not look the same… Not only the sky was overcast that day and the light was very different, also perspective changed. But it was an interesting comparison for sure.

Let’s start with a photo that I took on that late sunny afternoon. I love the prominent light “sitting” in the burlap, it adds certain charm to the image, don’t you think? I tried to apply a few Lightroom presets Kim provided during the course to the photo and most of all I liked the following results.

For those of you who are familiar with Kim’s presets, they are – from the left to the right:
kk_darkmood, kk_dreamlike and kk_shadows, all of them just slightly tweaked.

You can give such a different character to your photos when looking for their other faces. If you open yourself to the imagination and listen to what the particular photo wants to tell you, it will take you on a journey. Not just in your mind but also in your heart and before you touch the finishing tape, you’ll learn something new about yourself.

The photo that follows was taken on that later occasion and it represents the longed-for square-formatted image. It’s actually more artistic and somewhat darker than I expected but… why not?

Surprisingly or not, this photo also took me somewhere unexpected. I darkened the photo even more by applying Kim’s kk_darkmood preset to see what will happen and got this result:

Not really captivating I thought. But when I sent the photo from Lightroom to Photoshop Elements and the photo transformed in Lightroom from raw format into tiff format, it occurred to me to apply that preset once more, now to the tiff file. It multiplied the effect and created an image that looks almost like a drawing, I love that result:

Finally, to compensate a bit for the dark side, I created also a softer version. It feels gentle and soothing to me:

Well, that’s it. Hydrangea in the crate. 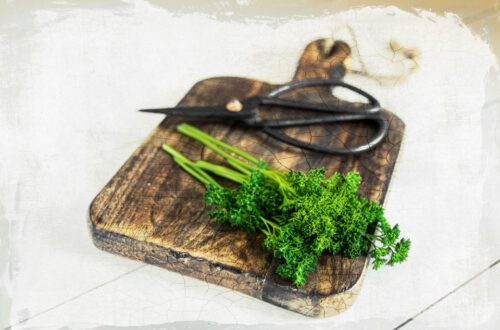