Quite a few years ago I planted a little tree peony bush (Paeonia suffruticosa) in our garden. I bought it in a garden centre because I liked the picture of its pink flowers presented on a label and based on described growing conditions, I decided the peony could grow happily here. It did and though they say the plant doesn’t tolerate replanting easily, it even survived when we needed to move it into a different part of the garden. It doesn’t grow way too quickly but every spring it is covered with impressive buds and then flowers which I’ll never grow tired of being looking at.

In autumn those beautiful flowers turn into quite interesting ovaries. I’m going to collect and dry a few of them and add them to my still life photography props. (You know, the other day I saw similar dried ovaries in a hobby centre and remembered the peony immediately…)

A few days ago I went to the garden with the intention to take a few photos there and my first steps headed towards the peony. When I got closer and chose a flower I wanted to portray, I noticed there was quite a big green beetle sitting inside. I was surprised to see another beetle sitting inside a near flower as well and eventually I found out that there were quite many of them sitting or moving inside the flowers, apparently drinking the nectar. Some of them had a nice shining wing case, others had their wing case scratched and worn. I wonder whether it might have corresponded to their age or perhaps to how adventurous they were?

Based on the beetle’s appearance and behaving, I identified it as a Rose Chafer (Cetonia aurata). I found two quite interesting facts regarding rose chafers. Firstly, though they have quite hard looking wing cases, they keep them down when flying, which means the wing cases stay closed in the air and just the wings are out. Secondly, according to Wikipedia “The metallic green colouring of the beetle is caused by the reflection of mostly circularly polarised light, typically left circularly polarised light. When viewed through a right circular polariser, the beetle appears to be colourless.” How curious is that?

I decided to take more photos in the garden this year to document it better. I’ve been key-wording my archive photos lately and I’ve found it very interesting to get back in time and see how the garden and the plants looked those years ago. Look at this Saxifraga × arendsi that is decorating my rock garden at the moment… Wasn’t the capture worth the time and effort?

Or having captured the tulip, beautifully contrasting a Hosta… which has just unrolled its leaves.

I’ve just replanted my Hostas and hope they will like their new place. They are very decorative plants and I only regret that they don’t keep their leaves throughout winter.

A garden may become a friend one loves to visit and spend time with, including all the work that needs to be done and all the effort that needs to be made. A garden may also become an enemy if the work and time consumed don’t seem worth the results. I feel fortunate enough to have the garden as a friend that inspires me and challenges me year after year… 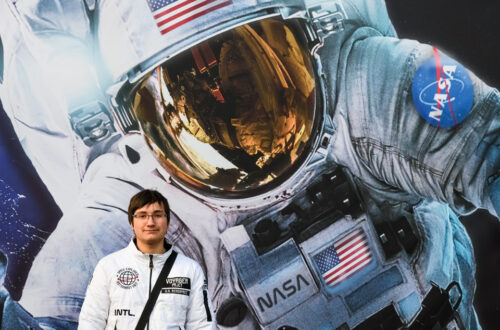