My husband comes from Ostrava so from time to time we go there to visit his mom and the rest of his family and often we also choose a particular place to visit. Last autumn he suggested we could have a look at the reactivated area of former ironworks and as I work in a company producing steel and steel/cast iron products, it seemed interesting enough to me to agree to that plan.

I didn’t regret at all as the area is enormously interesting, fascinating. We even took a guided tour that provided additional information and enabled us access to some parts that are not freely accessible.

At the time of our visit, I had no idea that I and my husband would come back a few months later to enjoy “Colours of Ostrava”, a music festival my husband was keeping an eye on for some time. I’ll tell you more about it later. Please take into account that while I was shooting with my DSLR during the first visit, all the photos I took during the festival come just from my cell phone so please excuse their poor quality.

Now come with me and I’ll show you at least something of what I saw on both occasions. I compiled a pack of facts but also tried to supplement the official information with my experience so here we go. 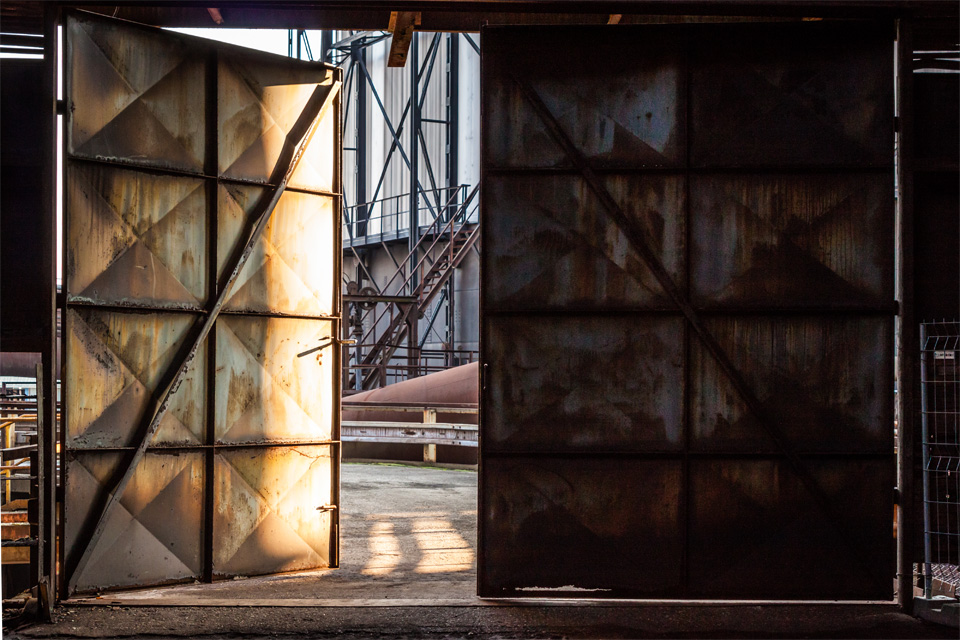 Industrial area of “Vítkovice Ironworks” is situated in the Moravian city Ostrava in its part Vítkovice and includes a unique complex which they say cannot be found anywhere else in Europe and which consists of a bituminous coal mine, cookery and blast furnaces.

Establishment of Vítkovice Ironworks was initiated by an Olomouc-based archbishop Rudolf Habsburský in December 1828 and smelting works named in his honour were put into operation in September 1830. After 170 years of operation, production of pig-iron was brought to an end and in 1998 the area was closed.

Instead of demolishing the old buildings and obsolete equipment, it was decided to reactivate the area and preserve it as a technical monument for future generations. What a great decision! In 2002 the area of the mine, cookery and blast furnaces was decreed a National Cultural Monument and in 2008 it was put on a list of European Cultural Heritage. 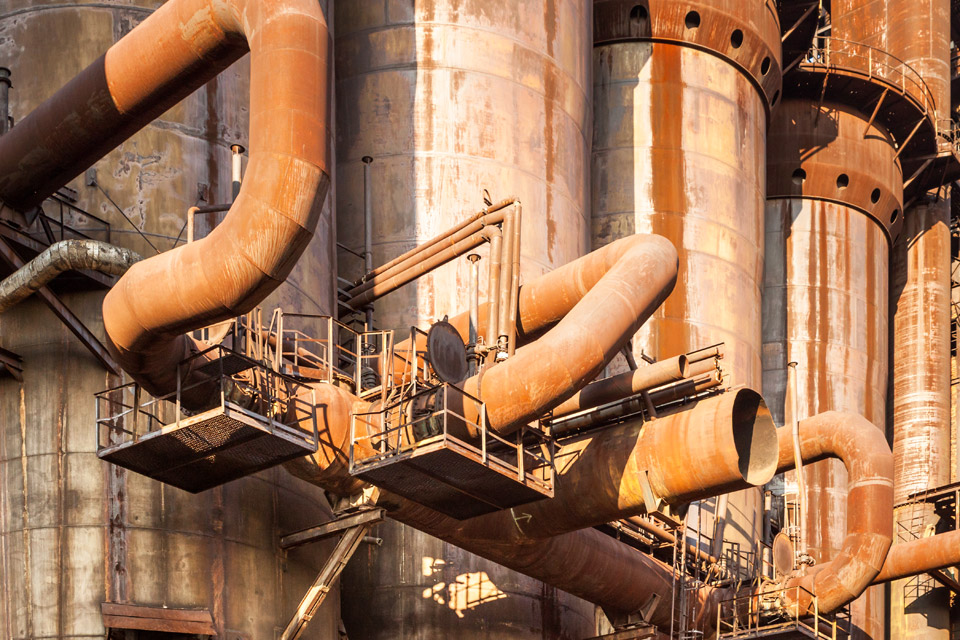 The area is not only to be preserved but also transformed and used for the purpose of research, development, education and culture. That has become the objective of the project “Dolní oblast Vítkovice”.

In 2012, the first part of the project was finished and three buildings were opened to the public: the Blast Furnace No. 1, gasholder and building of VI. Energy Centre.

The Blast Furnace No. 1 offers an interactive educational tour presenting manufacture of pig-iron. A special elevator takes visitors to the top of the blast furnace in the same way as raw materials used to be transported there and then the visitors walk along the technological flow of production. On top of the blast furnace, an additional structure more than twenty meters high was added which contains a café and whose top in 80 metres above ground offers a wonderful view of Ostrava and its surroundings. When we visited the ironworks in autumn, the superstructure wasn’t open yet but we enjoyed the tour and view on our following visit. We took the tour at night and that added an unexpected charm to it.

The gasholder was transformed into a multifunctional auditorium known as “Gong”. The sunken gasholder bell was lifted almost 15 metres higher and a structure was built into the space which now contains conference rooms, a cloak room, lobby and gallery, and an auditorium for 1 500 visitors. We had a reservation for a concert in Gong and I was glad to get to know the auditorium. The building looks impressive from the outside and it is interesting inside, but there is quite a bad smell inside, an industrial one, something most probably coming from that original gasholder. With my sensitive senses, I was able to put up with it the whole time the concert lasted which was one hour, not longing to run away, but it is there and it’s good to know.

The building of VI. Energy Centre, which was originally used for production of compressed air, was transformed into the “Small World Of Technology U6” which is an interactive exhibition of technical inventions that significantly influenced industrial and technical development in the last two hundred years. The exhibition is divided into 8 sections named after titles of Jules Verne’s books.

In the same year – which was 2012 – construction of a brand new Science and Technology Centre designed to interconnect the old with the new started. It was opened to the public in September 2014 and contains four permanent interactive exhibitions: Children’s world, World of civilisation, World of nature and World of science and discoveries. Look how the old buildings reflect themselves in the new building and the reflection visualises the idea of connection between the old and the new, I just love that! 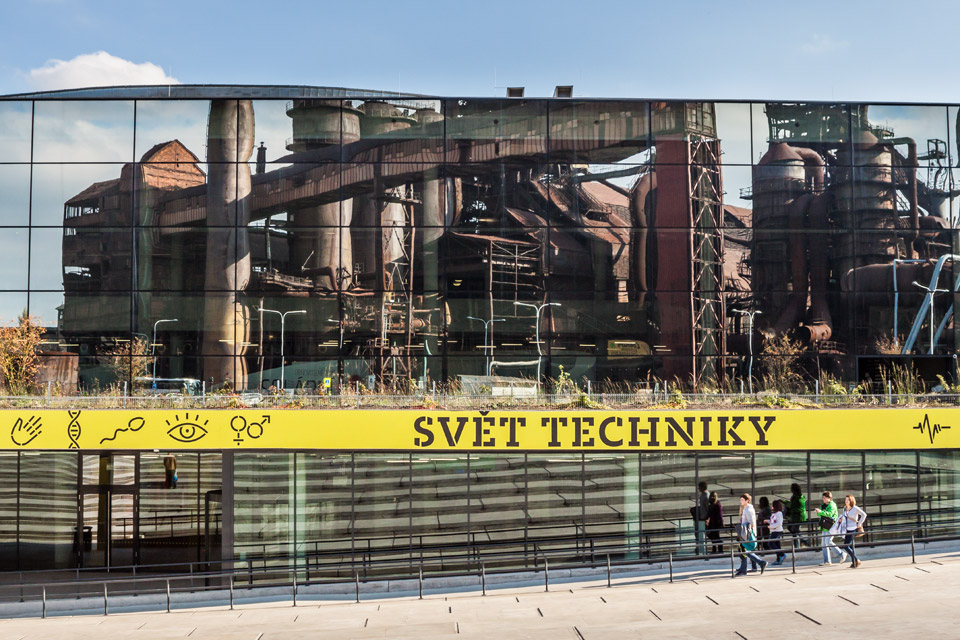 We decided to explore both the Small World of Technology and the Science and Technology Centre on another occasion, it seemed too much to experience everything in just a few hours.

For the transformation of the area, the architect Josef Pleskot was awarded the title of honour “Architect of the year” in 2014 and in my eyes he fully deserves the award. The transformation hasn’t been finished yet, there are further plans, but the area is already used and visited and that is wonderful. Who would have thought?

There are many cultural events taking place in the area, especially in summer, one of them the festival I’ve mentioned before “Colours of Ostrava”. When we were strolling through the area during that autumnal visit, we noticed a poster inviting to the festival and I felt intrigued to capture it, not knowing I’d see it again. 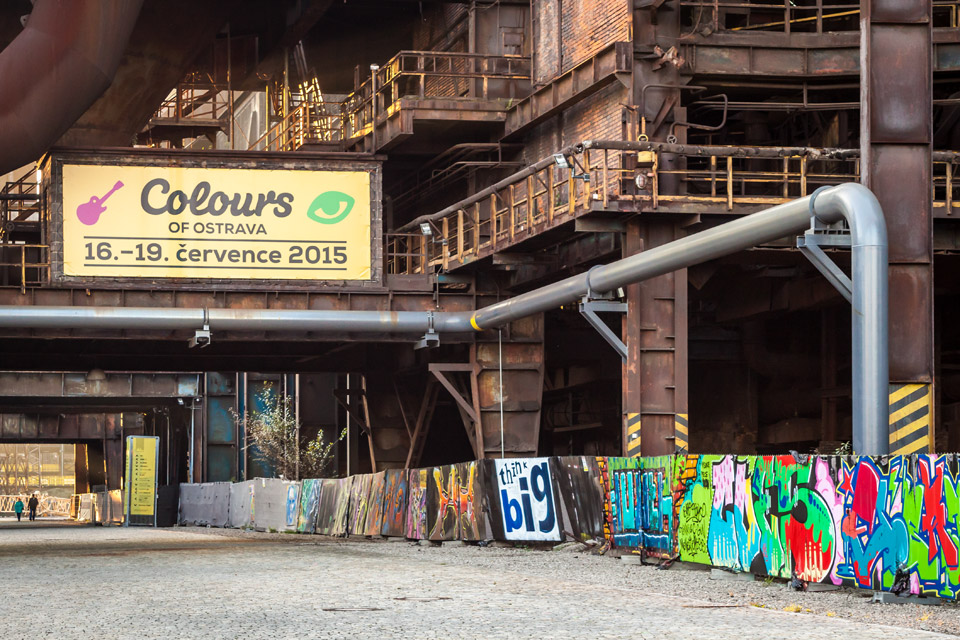 A few months later when I did see it again, the feeling was very different…

Colours of Ostrava is a multi-genre music festival having taken place in Ostrava since 2002, since 2012 it’s been held in the area of the former Vítkovice Ironworks. It lasts for four days and its musical performances are accompanied by theatre performances, workshops, discussions, films, clubs, there is much more than you can see and hear at that limited time. That was why we tried to prepare ourselves carefully and went through all what the festival offered this year via its website. We were listening to music samples of the bands and singers to be performing and made our personal program of what we wanted to hear. It was quite time consuming but paid off definitely at the festival itself.

Colours of Ostrava is one of the most visited music festivals in the Czech Republic and its visit rate gets higher every year, this year it was about 43 700 people. What I like about it is a wide range of musical styles and the fact that you can hear songs and bands that are not played here. I didn’t know most of the foreign bands and many of the Czech ones either.

The star of the festival should have been Björk but I think she disappointed many visitors by wearing a mask during all her performance and also, her style is very particular. We listened to a few songs though we hadn’t included her into our program and yes, it was interesting, but I wouldn’t need more.

The foreign bands whose performance I loved most were the following ones, in no particular order: Augustines * Other Lives * The Mispers * Kasabian * Nicolas Pellerin * Rodrigo y Gabriela * Nidi d’Arac * Owen Pallett * Heymoonshaker * CoCo & The Butterfields. Do you know and like any of them?

I also loved the performance of Mika who was closing the festival. We thought it wouldn’t be quite our cup of tea but went there partly because it was the final performance, partly out of curiosity and I was so happy we did. The atmosphere was unbelievable and his performance was beautifully entertaining.

This was my first festival ever and after those three weeks that have passed since it, I’m still full of impression and music and previously unknown experience. I was very glad that we visited the ironworks in autumn as there was so much to take in. Also, it was a great time for me and my husband to enjoy our time together, without our kids, getting to know one another in many new ways. I wish you could see my husband, who doesn’t like to dance, dancing tirelessly to the rhythm of Pellerin’s violin and me, who hates to make a spectacle of herself, jumping with clasping hands lifted above my head to the rhythm of Mika’s singing. Have I told you that in a few days we will celebrate 20 years since we got married? This was the best celebration I could have imagined…